Patients Caught In Middle Of Fight Between Health Care Behemoths

Cancer survivors Evalyn Bodick, 74, and Barbara Marsic, 63, are caught in the crossfire of one of the fiercest health care fights in the country. They fear they are about to lose access to the doctors they say have kept them alive.

The reason: the latest skirmish in a nearly decade-old battle between two large health systems in Pennsylvania, the University of Pittsburgh Medical Center (UPMC) and Highmark Blue Cross Blue Shield. Both are nonprofit and both sell health insurance as well as provide care. Only a handful of companies nationwide do both.

The dispute — headed toward a court date in May — has implications far beyond Pennsylvania’s borders. 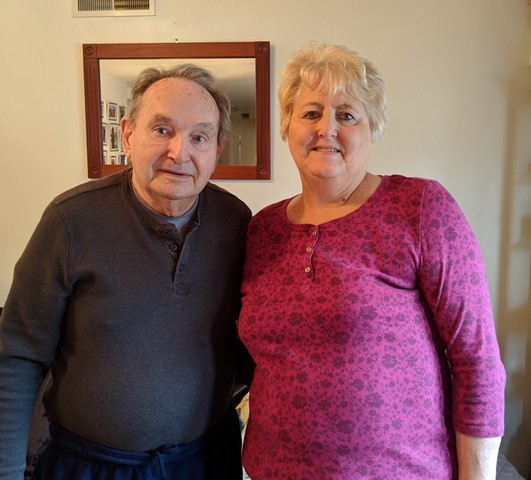 Evalyn Bodick says a Medicare Advantage plan offered by Highmark offers the best coverage at the lowest price for her and her husband, Joe. But that means she could lose in-network coverage for her breast cancer care at UPMC. (Courtesy of Evalyn Bodick)

Among the issues at stake are consumers’ access to care, especially costly specialty treatments; the disruption people experience when forced to switch doctors while changing insurance plans; the pricing power of ever-larger health care monopolies; and how much leeway a state has to oversee those companies’ practices.

In the meantime, Highmark customers find themselves in danger of paying more for medical care, in cash, or finding new doctors and hospitals to treat life-threatening conditions.

Pennsylvania’s attorney general, Josh Shapiro, has filed motions with a state court to intervene. A court ruling in his favor will signal to insurers and providers nationwide that states may choose to step in to protect consumers if a health company gains too much market power or consumers’ access to care is otherwise threatened.

A UPMC win could embolden health care companies to use dominant market positions to compete even more aggressively.

The feud between the health care giants began in 2011 over pricing, payment rates and competition, roiling medical care in western Pennsylvania. The state imposed a five-year legal truce in 2014, but that ends June 30.

Shapiro is asking the court to compel both companies to extend the accord and contract with each other, thus allowing consumers with insurance through either company to see providers owned or affiliated with the other company on an in-network basis. And he requested that the courts empower the state to establish a mediation process if the companies can’t agree on contract terms.

Shapiro’s initial motion was turned down early this month by a court that said the June 30 deadline should stand because it had already been ratified in earlier legal decisions. But the state Supreme Court on Monday agreed to hear arguments in the case.

Health experts say Shapiro’s actions are unprecedented. “No other state attorney general has gotten this deeply involved in a health care dispute,” said Martin Gaynor, a professor of economics and health policy at Carnegie Mellon University in Pittsburgh and former director of the Bureau of Economics at the Federal Trade Commission. “He is asking for a major change in the way this marketplace works. If the litigation goes a certain way, it will certainly resonate nationally. It’s a big deal.”

A Battle Of Titans

UPMC is one of the nation’s premier hospital systems, famous for pioneering work in organ transplants. It owns or operates 40 hospitals, 700 doctors’ offices and outpatient clinics, and several well-regarded cancer treatment centers. Its insurance business covers 32% of the insured residents in western Pennsylvania. With 87,000 employees, UPMC is also Pennsylvania’s largest non-governmental employer.

Highmark is among the largest health insurers in the country, with 4.5 million enrollees in Pennsylvania, Delaware and West Virginia, and another 16 million customers for its dental, vision and other insurance products sold nationwide.

Headquartered in Pittsburgh, it’s also one of the state’s largest employers.

In 2013, Highmark bought the West Penn Allegheny Health System, changing its name to the Allegheny Health Network. That network now consists of eight hospitals, a handful of outpatient surgery centers and 2,800 physicians at 253 locations. It directly competes with UPMC.

The focal points of the current dispute revolve around access to UPMC hospitals, doctors and specialty clinics — especially cancer care — for two groups: the 227,000 people enrolled in Highmark’s Medicare Advantage plans and several thousand people enrolled in Highmark plans through their own or a spouse’s job who have been in ongoing treatment for cancer or other serious conditions.

Under the 2014 agreement, these two groups retained in-network access to UPMC hospitals and doctors.

UPMC last year announced it would shut down in-network access for these remaining Highmark enrollees after June 30.

‘It’s A Kind Of Extortion’

Bodick, who lives in Springdale, Pa., was diagnosed with breast cancer in 2000. She had a mastectomy and four additional surgeries, including when the cancer spread to her lungs.

Through it all, Bodick has been cared for by UPMC doctors and her surgeries were at a UPMC hospital. “These doctors saved my life and have kept me alive. I trust them completely,” she said.

Bodick has a Highmark Medicare Advantage plan and said it still offers the best coverage at the lowest price for her and her husband, Joe, who is retired.

Now, she said, she’s being told she’ll have to pay out-of-network charges in cash if she wants to be treated by UPMC doctors. “I don’t have the money to do that,” said Bodick. “It’s a kind of extortion.”

Barbara Marsic has Highmark insurance coverage through her husband’s employer but has been treated for years at UPMC for her cancer and multiple sclerosis. She doesn’t want to change her doctors. (Courtesy of Barbara Marsic)

Marsic faces a similar predicament. Diagnosed with breast cancer in 2006, she has had several surgeries performed by UPMC doctors and sees a UPMC oncologist.

Marsic, who lives in Upper St. Clair Township outside of Pittsburgh, also has multiple sclerosis and has been treated by the same UPMC-affiliated neurologist for 33 years. Her insurance, provided by her husband’s employer, is through Highmark.

In recent weeks, both her oncologist and neurologist have told her they will not be able to treat her after June 30 unless she pays in cash at higher out-of-network rates.

“I just hate the idea of losing the doctors I’ve seen for years,” Marsic said. “But it may cost too much to stay with them.”

Highmark said it supports Shapiro’s efforts. A spokesman, Aaron Billger, said the company seeks “a level playing field” and “a wide choice of providers for patients.”

But UPMC is fighting it.

Shapiro’s legal motions, which have the support of Democratic Gov. Tom Wolf, alleged that UPMC has not acted in the public’s interest as required by its status as a nonprofit system that gets significant tax breaks. He also alleged that UPMC, the dominant provider in the state, is using that market power to charge higher rates “without regard to the increase on the cost of the region’s healthcare.”

UPMC countered that in 2018 it provided $1.1 billion in “IRS-defined” community benefits. In addition, a spokesman said, UPMC paid nearly $600 million in taxes in 2018. The health system also claimed in legal filings that western Pennsylvania has become “one of the most competitive and pro-consumer markets in the nation with some of the lowest-cost health plans available anywhere.”

UPMC said that Shapiro’s requests violate the usual operations of a free and competitive marketplace, as well as laws governing health insurance.

“Insurers must be free to create their own networks of providers based on a host of factors, including quality of care and the fees they’ll accept,” said Paul Ginsburg, director of the USC-Brookings Schaeffer Initiative for Health Policy. “That enhances competition, can lower costs and is good for consumers.”

Likewise, he said, doctors and hospitals are free in an open marketplace to contract with whom they want.

But he also said that the situation in western Pennsylvania is not typical. UPMC is using its “market clout as the leading provider of care in the area to become the dominant insurer, and crush the competition. That’s not something we have seen elsewhere,” Ginsburg said.

Gaynor agreed. “This is not how a well-functioning competitive market should work,” he said.